A modernistic architectural design developed in 1922 by a renowned Finnish architect in response to worldwide competition. 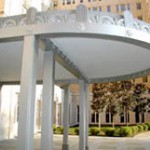 A creative but short-lived movement, Art Deco designs not only influenced the architecture of most American cities, but also had an impact on fashion, art and furniture, too. From 1925 to 1940, Americans embraced Art Deco architecture as a refreshing change from the eclectic and revivalist sensibilities that preceded it. The style takes its name from the Exposition Internationale des Arts Decoratifs held in Paris in 1925 as a showcase for new inspiration. 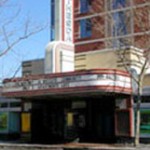 The Art Deco style was essentially one of applied decoration. Buildings were richly embellished with hard-edged, low-relief designs, geometric shapes (including chevrons and ziggurats) and stylized floral and sunrise patterns. Shapes and decorations inspired by Native American artwork were among the archetypes of the Art Deco lexicon. Although some buildings utilized expensive hand-crafted decoration, others used machine-made repetitive decorations. To keep costs down, ornamental treatment was often limited to the most visible parts of the building. 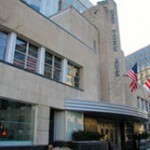 In its day, some of what we now refer to as Art Deco architecture was often called Moderne or Art Moderne, a term used to describe the most advanced design ideas from the 1930s to the end of World War II. Being close cousins, Art Deco and Art Moderne shared stripped-down forms, but Art Moderne had a horizontal rather than vertical emphasis, rounded rather than angular corners and little surface ornamentation.

Art Deco design was first applied to public and commercial buildings in the 1920s. Although individual homes were rarely designed in the Art Deco style, architects and developers, especially in Greater Washington, D.C., found that the Art Deco style adapted quite well to apartment buildings. Most of these buildings are still in use, a testament to the city’s richly varied architectural history. 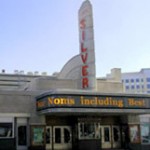 For all its panache, Art Deco architecture was immensely practical in execution. For projects on a tight budget, the simple box could be decorated with motifs and embellished with appendages that made a conceptually rudimentary structure appear fashionable and up to date. Visual interest could be further enhanced by stretching linear forms horizontally and vertically throughout the building. This was frequently done with bands of brick, canopies or copings.

A 1984 book, Washington Deco by Hans Wirz and Richard Striner, catalogs over 400 Art Deco buildings in the Washington, D.C. area. Two examples of Art Deco design are on Capitol Hill: the former Kresge Store at 666 Pennsylvania Avenue SE built in 1936 and recently expanded and the Penn Theater at 650 Pennsylvania Avenue SE built in 1935. Although the Penn Theater itself was demolished, the marquee and a portion of the façade have been incorporated into the new building.

In classic Art Deco, rectangular blocky forms were often arranged in geometric fashion and broken up by curved ornamental elements. The aim of classic Art Deco was always to achieve a monolithic appearance with applied decorative motifs.

Art Deco designers adorned flat roofs with parapets, spires or tower-like constructs to accentuate a corner or entrance. Decorative curiosities such as chimneys were added to further enhance the design

Windows in Art Deco designs usually appear as punctured openings, either square or round. To maintain a streamlined appearance for the building, they were often arranged in continuous horizontal bands of glass. Wall openings are sometimes filled with decorative glass or with glass blocks, creating a contrast of solid and void forms while admitting daylight.

Doorways in Art Deco architecture are sometimes surrounded with elaborate pilasters and pediments and door surrounds are often embellished with either reeding (a convex decoration) or fluting (a concave decoration). The quality and extent of the decorative motifs vary by project and designer.