This architectural language flourished from about 1830 to 1850 when it was seen as a national style. 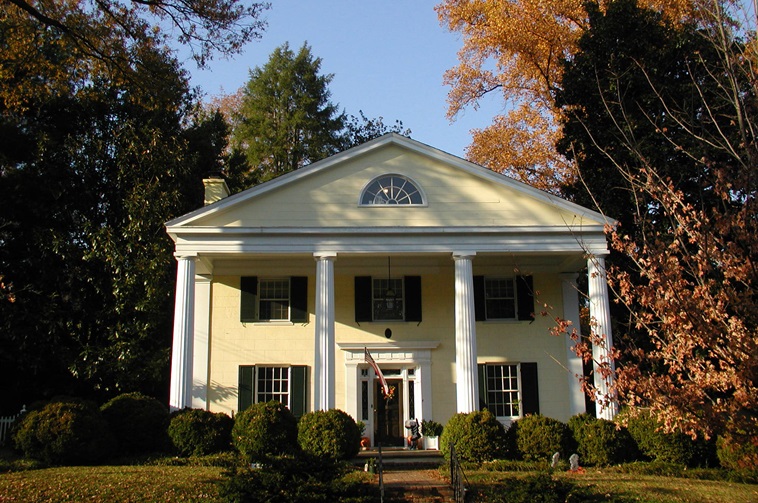 Greek Revival is an excellent example of an architectural style that gained popularity by exploring parallels between an earlier culture and the present day. With British influence waning considerably after the War of 1812 and the nation rapidly expanding westward, the Greek Revival architectural style was fundamentally an expression of America’s triumphant sense of destiny and the sense that our newly formed nation was the spiritual descendant of Greece, the birthplace of democracy. Americans’ sympathy and support for Greece’s war of independence from Turkey also contributed to this idiom’s influence. Popular from 1825 to 1860 in more isolated parts of the country, the Greek Revival style was prevalent right up to the Civil War. 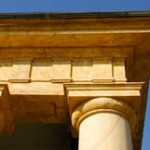 In time, Greek Revival architecture became known as the national style, so pervasive were the temple-fronted façades on the nation’s churches, banks, town halls and houses.

Appropriate to the nation’s emerging sense of self, one of the country’s first Greek Revival buildings was the Second Bank of the United States built in Philadelphia between 1819 and 1824. Fostered by building handbooks used by carpenters and builders, the Greek Revival style moved West with the early settlers and acquired subtle regional differences along the way. Not surprisingly, the fastest growing regions ended up with the largest number of Greek Revival homes. 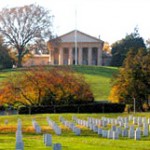 Popular fascination with Greek Revival began to wane toward the late 1800s as architects in the East explored other architectural styles, such as Gothic and Italianate.

Homes in the Greek Revival style were usually painted white to resemble the white marble of impressive and costly public buildings. The details were bold, but with simple moldings. Heavy cornices, gables with pediments and unadorned friezes were typical. The gable-fronted house, found throughout America is one of the Greek Revival style’s enduring legacies. 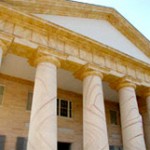 Stucco, wood and occasionally stone are essential building materials of the Greek Revival style. Intended to resemble stone or marble temples, the buildings were usually painted white or enhanced with a faux finish such as the Lee Mansion at Arlington National Cemetery.

Low pitched gable and hip roofs were typical. The cornice line was embellished with a wide band of trim to emphasize the temple-like roof. Standing seam tin or cedar shingles were materials used at the time.

The size of window panes in historically accurate Greek Revival homes typically reflected mid-nineteenth century glazing technologies. Thus, windows were mostly double hung with six panes to each sash. Decorative windows were frequently in three-part assemblages. Among the Greek Revival style’s unique features are small rectangular windows set into the frieze beneath the cornice that replaced the common dormer. Window surrounds tended to be less elaborate than doorways.

Columns and pilasters were among the most common elements of Greek Revival architecture. Although classical columns were round, by definition, the Greek Revival style also used square or even octagonal columns. The columns were designed without bases as in the Greek style or with bases as in a Roman adaptation. Columns could be fluted or smoothed, but they were almost always built of wood.

The most common and simplest capital style found in Greek Revival architecture is Doric. Only a small percentage of Greek Revival designs are Ionic with even fewer in the Corinthian mode. Occasionally designers used pilasters much like columns, marching them across the front façade of the wall to which they were attached.

Because the vault design was unknown to the Greeks, a simple post-and-beam construction was widely used. For this reason, the arched entrances and fan lights common in the Georgian and Federal styles were not part of the Greek revival movement.

The door itself might be single or double, divided into one, two or four panels. Almost invariably, a portico or porch was added in front of the entrance.