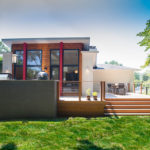 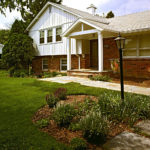 Ranch houses originated in Southern California in the 1930s and 1940s with architect Joseph Eichler providing many good examples on the west coast. Ranch houses were built close to the ground with low pitched hip roofs and occasionally with a low-pitched gable roof. This ranch style was influenced by the architect Frank Lloyd Wright’s “Prairie Style Home,” which is indicative of the wide-open land areas the United States is known for as well as suburban growth and the use of cars became more prominent. Integrated garages, rather than detached garages, were often built into the house design. The abundance of land led to ranch style houses often being referred to as “ramblers” as they grew in size. As with many American design creations, the style is eclectic, perhaps more eclectic than other home styles found in the U.S. The appreciation for mid-century style homes grew after WWII with the need to house returning war veterans who had growing families and tight housing budgets. 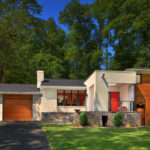 Within the mid-century modern architectural style is the unique house form known as split-level—it’s usually designed similarly to a ranch or contemporary style but in the split-level configuration. Popular with home buyers in the 1950s, the split-level style makes efficient use of space in a cost-effective way.

Washington, DC area homeowners acknowledge that they can buy more house for their money with this style. Split-level homes have three or more separate levels with partial flights of stairs linking the levels. These houses are often referred to as a tri-level split, or bi-level split. A popular feature found in many tri-level splits is the lower level integrated garage and, at times, an attached carport.

Exterior materials used for these homes varied and were influenced by the geographic area. Stone was used as veneer, and in the Washington, DC area, it is not unusual to see the local Carderock stone (a mix of gray and brown stone). Brick is also found on many ranch houses. Stucco was used in some southern states as well as concrete block but seldom in the DC area. Wood siding was utilized and installed horizontally, as clapboard, or vertically as a board and batten.

Low-pitched hip roofs are the most common for these homes, followed by a low-pitched gable. Dormers were not used in the style because there was only minimal attic space. Roof overhangs were substantial with exposed rafters on the more expensively designed homes. More modest ranch and split-level homes have minimal roof overhangs, either with an open eave or a closed eave soffit. Asphalt shingles were commonly used. Very rarely was the roofing material metal or clay tile because of high cost.

The ranch and split-level homes borrow on a wide variety of window types. To emphasize the close-to-the-ground design of the ranch style, linear window designs were utilized; awning, hopper, casement, and double hung windows (each with horizontal panes) can be found. The picture window became a feature of every ranch or split-level home. Picture windows were assembled with a portion of the window operable for ventilation and a fixed area of glass for the view. Often the horizontal design emphasis was repeated in the picture window.