The style was popularized by a group of 19th century English architects. 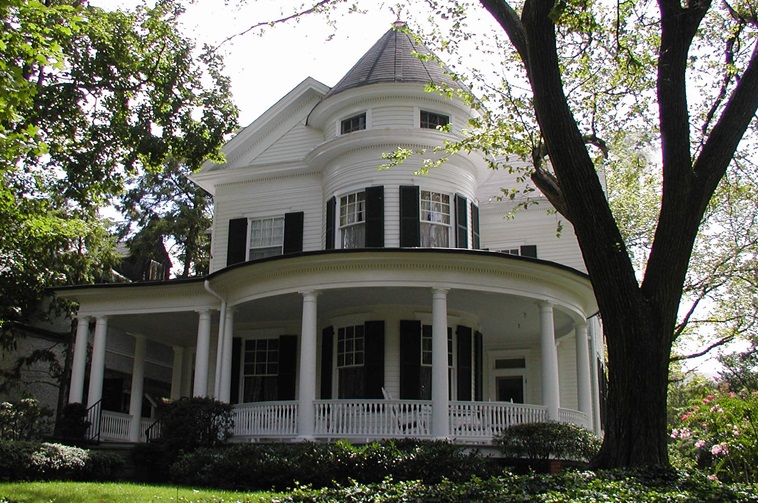 The peak period of Queen Anne architecture was 1880–1900, although the style persisted for another decade. The Queen Anne style was named and popularized in England by the architect Richard Norman Shaw (1831-1912) and his followers. The term inaccurately implies aesthetic ideas from the reign of Queen Anne (1702-1714). However, Queen Anne architectural design was actually based on much earlier English buildings, mainly those constructed during the Elizabethan and Jacobean eras (Elizabeth I reigned 1558–1603; James I, 1603–1625). 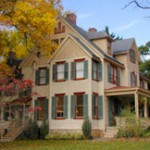 In 1874–75, the first important expression of the Queen Anne style by an American architect rose in Newport, Rhode Island, where H.H. Richardson designed the Watts-Sherman house. However, many Americans first saw the Queen Anne design in 1875 at the Philadelphia Centennial, where the British government built several houses in the Queen Anne style. 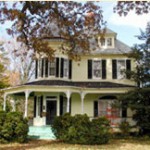 As with other ornate Victorian-era architecture, the Queen Anne style found its most complete expression in detached homes that showcased its sculptural shapes and ornamented skin. These houses were typically built of wood, allowing the designer unfettered artistic expression in the patterns and details that define the Queen Anne style. Bold and unconventional color schemes were also a Queen Anne design trait of which San Francisco’s famous Painted Ladies are an example. 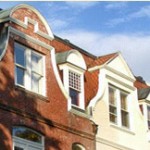 The decorative details on most Queen Anne homes in Washington, D.C. and other large eastern cities tended to be more subdued because of the urban preference for patterned brick and carved stone. Thanks to a building boom during the late nineteenth century, many Queen Anne townhouses were built in Washington, D.C. and fortunately, many of those buildings survive today. Round towers and broad decorative gables, as well as elaborate Queen Anne chimneys, dormers and windows are showcased on homes throughout Capitol Hill, Georgetown, Dupont Circle and elsewhere. There is a wonderful detached Queen Anne home at 36th Street NW on Macomb Street NW and others on Newark Street NW in the Cleveland Park area. 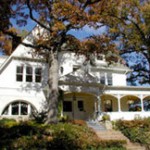 The Queen Anne style was achieved in a variety of ways with an array of materials that included patterned brick or stone, wood shingles and clapboard, slate, occasionally stucco and sometimes, terracotta panels. Decorative stone panels were frequently set into the wall, as were custom-molded and colored bricks, allowing some variation and detailing. Wood buildings could assume the full range of color and design with paint.

Steeply pitched and complex, Queen Anne roofs provided visual interest and variety with gables, dormers and turrets or towers often all in one roof.

Queen Anne towers — square, round or polygonal — were a favorite feature among architects designing Queen Anne homes. In some Queen Anne homes, instead of a tower, a turret supported by a corbel, projected from the second floor. The towers and turrets were capped with a conical, tent, domed or other artfully shaped roof and finished off with slate shingles and a copper finial ornament.

Typically, Queen Anne homes were embellished with bay windows and oriels. Sometimes the latter was part of a turret. Window surrounds were, as a rule, simple. Lower window sashes usually had only a single pane of glass. The upper sash may have followed suit, although it was frequently multi-paned or framed by small square panes. More elaborate window sashes featured stained glass in the upper portion of a double-hung window or in a transom.

Curved glass is unique to Queen Anne architecture, occasionally found in round bays and towers.

Queen Anne doors may have delicately carved decorations, surrounding a single large pane set into the upper portion of the door.