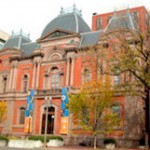 As its name implies, the Second Empire architectural style can be traced to France, specifically to the reign of Napoleon III (1852–1870). Under the emperor’s direction, much of Paris was rebuilt with wide avenues and striking monumental buildings, replacing medieval alleys and structures. The reconstruction of Paris in the Second Empire style had a major impact on building design throughout Europe and the United States. 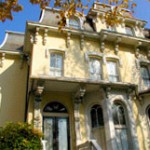 The Second Empire style was most popular in the Northeast and Midwest, but less common on the Pacific coast and rare in the South. Second Empire homes and buildings were generally built in the more affluent regions of the country. Predictably, the architectural style’s popularity dropped rapidly following the economic depression of 1873.

The Second Empire style appropriated the design characteristics of several historical languages, thereby departing from the custom of slavishly imitating established idioms. Free adaptation, allowing architects far more leeway in their design, mirrored the belief that in America, one could pick and choose the best from the past. This philosophy drove a mix-and-match sensibility. 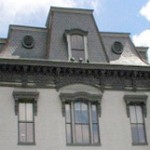 In addition to eclecticism, a constant of the Second Empire style is the mansard roof, a slightly corrupted expropriation from François Mansart, the seventeenth-century architect who introduced the mansard roof in the enlargement of the Louvre.

Beneath their distinctive roofs, Second Empire homes had much in common with other Victorian styles. For example, Queen Anne homes were often remodeled and enlarged by adding extra floors and a mansard roof. Similarities between Second Empire and Italianate are found in their stylistic use of overhanging eaves with decorative brackets and ornate door and window hoods. 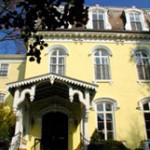 Two fine examples of Second Empire buildings, familiar to many in the capital city, are located directly across from each other not far from the White House in Washington, D.C. The Renwick Gallery designed by architect James Renwick, at the northeast corner of 17th Street and Pennsylvania Avenue N.W., was built in 1859. It was the first major U.S. building designed in the Second Empire style. A decade later, work began directly across Pennsylvania Avenue, on the complex now known as the Old Executive Office Building. Designed by architect Alfred B. Mullet and notorious for its rich embellishment, the OEB is perhaps our nation’s grandest example of the Second Empire style.

The townhouse, a typical residential form built in Washington, D.C. between 1860 and 1880 was dominated by the Second Empire style (along with the Italianate).  The mansard roof is particularly well-suited for townhouses, making them appear tall, but not massive.

As with other Victorian trends, Second Empire ornamentation was inspired and unstinting. Decorative details in Second Empire architecture included iron cresting on the roof, heavily bracketed cornices, quoins and balustrades. The general effect is monumental and ornate, appropriate to the Second Empire style’s Napoleonic roots.

Second Empire homes often had a simple box form, square or rectangular, and were highly symmetrical. Many examples exist in Washington, D.C. such as Cooke’s Row on Q Street NW in Georgetown. Other good examples are the Visitation School located on 35th Street NW and the Folger’s offices on the 500 block of 8th Street SE.

There was also an asymmetrical form of Second Empire architecture, usually designed as an L plan. It could have two wings or be built as a single block with a strongly projecting bay that called attention to an entrance where the wings meet.

Towers were also a common Second Empire feature. Today, visually compelling towered houses are frequently featured in Halloween illustrations and horror films. (Remember Alfred Hitchcock’s Psycho or the Addams Family TV series?) The tower can be square or rectangular and placed either symmetrically or asymmetrically.

In Second Empire architecture, roofs were almost always slate shingles and occasionally the slate was stylized with a decorative pattern. The primary building material was wood and brick. Brick buildings were sometimes embellished with cut stone to make them more ornate. The style alluded to grandeur the buildings with clapboard utilized wood quoins at the corners of the building and heavily ornamented wood trim with hoods at windows and doors.

Beyond its sheer visual strength, the advantage of a mansard is the added space it offers. Behind what appears to be a roof, there is room for a full floor instead of a mere attic. The mansard roof took on several shapes over the course of the Second Empire style’s development: straight-angled, convex, concave and even “S” curved shapes all with or without dormers.

In Second Empire architecture, central feature windows often placed over an entrance were arranged in pairs and occasionally as triple sets. Elaborate public buildings (such as the Renwick Museum) had windows flanked by columns or pilasters. Wood clapboard homes were designed with elaborate window hoods supported by brackets, multiple layers of wood trim, usually with incised patterns. Whimsical eyebrow shapes placed over windows, doors and dormer windows were common. Brick homes tended to be simpler than wood because of the expense associated with elaborate brick and stone work. Bay windows were often used as a Second Empire architectural feature on a façade that accommodated an abundance of ornamentation.