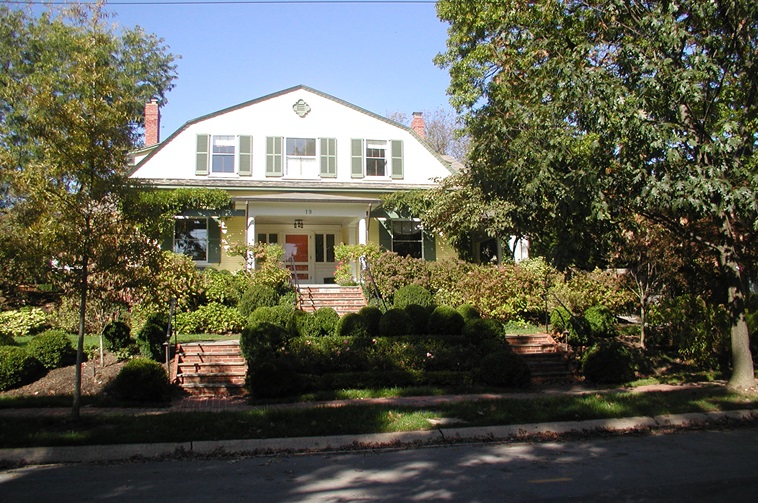 Appearing on the American scene between 1880 and 1900, the Shingle style is distinctly American in its wood construction, typically blending into natural surroundings. The Shingle houses were often built on stone foundations that seem to emerge from bedrock. Thus, the massive, horizontal structures appeared to hug the ground. Porches, balconies and large windows encouraged a tactile interaction with the outdoors. Today, Shingle architecture evokes a slow and romantic lifestyle that most of us can only dream of. Developed in New England, the Shingle style was most popular in seaside resorts. 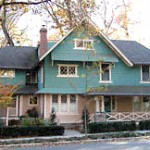 Although indisputably of American origin, the Shingle style borrowed liberally from other Victorian architectural styles. For example, Shingle style porches, shingles and asymmetrical forms were from Queen Anne. Palladian windows, gambrel roofs and the complexity of the forms and stones are often attributed to the Richardsonian Romanesque architectural design popular at the same time.

Still, Shingle style’s informality and eclecticism was a clear expression of American individualism. Freedom of design was encouraged and asymmetry was preferred. Architects handled proportion and architectural details as sculptural compositions. 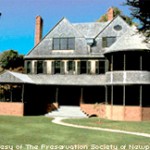 Because of the complexity of the forms in a Shingle style design, the cost of construction was often beyond that of the average homeowner. As a result, Shingle architecture was never adapted to mass vernacular housing and in many ways remained a high-fashion style. One of the best examples of a Shingle style home in Washington, D.C. can be found in Cleveland Park at 3030 Macomb Street N.W.

In contrast to the other Victorian-era architectural styles, Shingle style de-emphasized applied decoration and detailing in favor of complex shapes wrapped in cedar shingles. Its few decorative details tended to enhance the irregularity of the construction with the shingles tying the diverse forms together.

Roofs and walls were covered in shingles, which could be stained, painted or weathered naturally, depending on the weather and location. Occasionally, the roof shingles would be a different color from the wall shingles. More expensive Shingle style homes had rough-hewn stone foundations, stone porch columns and stone walls on the first floor.

Complex roof forms were common in Shingle architecture. A small percentage of Shingle style houses had hipped roofs, typically handled as a large form punctured by smaller roof forms. Gables were usually arranged asymmetrically, although paired or symmetrically arranged cross gables were not unheard of.

Less than one quarter of Shingle style houses had a side gabled roof with a tower placed in the front. For Shingle houses with a T or L plan, gables were often placed to intersect each other or the larger gable was crossed with several smaller roof forms.

The gambrel roof form used in nearly one quarter of Shingle style homes allowed a full second floor to be incorporated into the steeper roof shape, while giving the appearance of only one floor.
Dormers were sometimes used to add visual complexity to the roof. The most common dormer was the gable, although the careful observer can find dormers with hip roofs, shed roofs, eyebrow windows, polygonal shapes and curved tops.

About a third of Shingle style homes had towers with tower roofs often blended into the main volume of the house to form a continuous roofline. In lieu of a tower, a portion of the wall was often curved out, forming a bulge to provide more interior space and additional visual complexity on the exterior.

Shingle style houses had numerous windows, some of ample proportions and some rather small. The typical double-hung window was commonly arranged with a single-pane sash at the bottom and a multipane sash above. For large wall areas, windows were arranged in rows of two, three or even more. Palladian windows, as popular then as they are today, were a common eclectic ingredient. For the more complex Shingle designs, large windows were placed in bays of one, two or three stories. Transoms or decorative windows in round, square or rectangular shapes were also used in Shingle architecture.

Most Shingle style homes had porches, possibly because homeowners actually had the time to relax on them. Porch supports were often plain with simple straight balusters used for railings. Other support options used in Shingle architecture were classical columns, shingle-clad columns or stone supports. All porch designs were in some way related to the adjacent wall or trim material.