An architectural style loosely based on a variety of late Medieval English prototypes, ranging from thatch-roof folk cottages to grand manor houses. 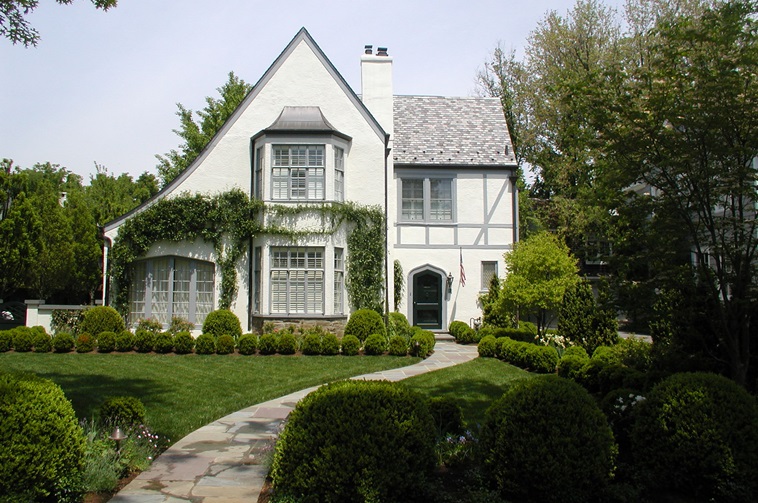 From 1890 to 1940, some American homes were built based on a medley of late Medieval and early Renaissance styles. Homes with these distinguishing characteristics were grouped under the heading of Tudor architecture. In the Washington, D.C. area, Tudor homes (along with Colonial Revival) made up the largest portion of homes built during the 1920s and 1930s. 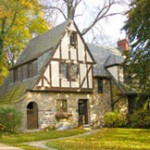 European-trained architects, influenced by Old World styles, brought the eclectic, asymmetrical Tudor style to America toward the end of the nineteenth century. Built for wealthy homeowners, Tudor houses were of solid masonry with elaborate decorative stone and brickwork. They were sometimes called “Stockbroker Tudor” because their financially successful homeowners had frequently made their wealth in the booming 1920s stock market. 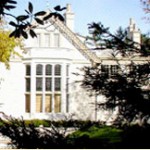 The Tudor style fell out of popularity around World War II when a resurgence of patriotism encouraged an appreciation for a more American style, that is, Colonial Revival. Tudor architecture was also expensive to build, not easily replicated and prone to maintenance issues.

One of the best examples of a Tudor style house in Montgomery County, Maryland is the landmark Newlands/Corby Mansion in Chevy Chase at the juncture of Chevy Chase Circle, Connecticut Avenue and Brookville Road. This Tudor home has a variety of dormer styles, window types and richly decorated chimneys that make it a highly stylized Tudor design. It has uncoursed stone, half-timbering, wide, decorated verge boards and a stone porte cochere. Just east of the mansion at Western Avenue and Brookville Road is a fine example of a more modest, but beautifully detailed, Tudor home. 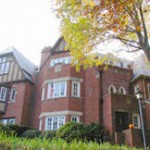 Tudor homes are characterized by their steeply pitched gable roofs, playfully elaborate masonry chimneys (often with chimney pots), embellished doorways, groupings of windows and decorative half-timbering. The latter is an exposed wood framework with the spaces between the timbers filled with masonry or stucco. 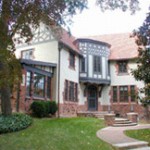 There are several easily identifiable features of American Tudor architecture. The first is stucco walls with or without decorative wood half-timbering. A few Tudor houses of this style had weatherboard or shingled walls with stucco and half-timbered gables. Other Tudor style houses used stone for the walls often with a decorative stone trim. The most prevalent building material for American Tudor homes was brick, frequently laid out in an elaborate pattern on the first story with a second story of stucco or wood and false half-timbering in a decorative pattern.

A distinguishing feature of Tudor architecture and design was the steep gabled roof, often punctuated with small dormers and clad with slate. The main gable frequently had a secondary side or cross gable. Gable ends were often decorated with verge boards whose decoration ranged from simple to highly carved. A few variants had gables with parapets, which is very English.

Tudor style houses usually had casement windows grouped in rows of three or more framed in either wood or metal. Double-hung windows were less common. Windows were often divided into six or eight panes and were sometimes made up of rectangles and other times arranged in a diamond pattern. Windows were usually placed symmetrically in the main gable.

A Tudor home’s entrance was part of an asymmetrical assemblage of architectural elements, some decorative and some meant to provide protection. Protection came from a thick masonry wall that allowed the door to be recessed, a projecting bay window or a small roof over the door. Renaissance embellishments included arched openings, board and batten doors, luxurious black metal door hardware and tabs of cut stone set into the brick wall, giving a quoin-like effect.