A transitional architectural style which links the preceding Gothic Revival with the subsequent Queen Anne.

Of the many architectural styles prevalent in the United States during the Victorian era, the Stick style was the most expressive of a building’s underlying structure. Decorative wood trim, called stick work, was applied to the exterior of Stick homes to emphasize the basic wood frame structure underneath.

Popular between 1860 and 1890 and built predominantly using wood, there are few pure examples of the style remaining in urban areas. However, many fine examples of Stick style may be hidden beneath slipcovers of aluminum, vinyl, stucco or asbestos shingle installed in an attempt to modernize the appearance of an older home. 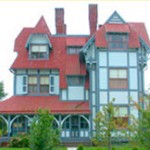 The Stick style evolved from the work of architect Gervase Wheeler, an English immigrant and author of Rural Homes and Sketches of Houses Suited to American Country Life, which was an influential treatise on residential architecture first published in 1851. Over several years and eight editions, the book popularized Wheeler’s ideas on architectural design, particularly his notion that buildings should be structurally truthful.

Wheeler was particularly influenced by Tudor style architecture with its exposed heavy oak framing and half-timbering, the consummate expression of structural honesty. However, his creations were more subtle, using decorated façades to express the structural wood framing that lay beneath the surface. 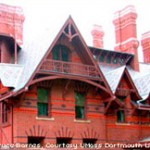 The purest form of Stick style can best be appreciated with a visit to the Emlen Physick House (1879) at 1048 Washington Street in historic Cape May, New Jersey. This beautiful example has most of the design elements of Stick style architecture on display, including steeply gabled roofs, tall proportions and decorative structural overlay. Unusually large brackets form curved diagonal braces along the porch. Extended rafters with brackets support the overhanging roofs and applied trim frame windows and surround panels of diagonal bead board. Large sash windows are fit into the rectangular pattern of the façade and decorative brickwork panels are inset into large brick chimneys. 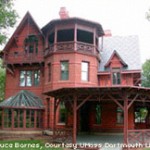 In Washington, D.C., a trip to Capitol Hill will yield examples of Stick-influenced brick Victorians, many with decorative X bracing and drilled holes for balcony railings and porches. Above the balconies, a cornice uses the same elements. Ornamental brackets, railings, steps and newel posts all enhance the wood detailing in a Stick design.

Numerous examples are located on the 500 block of Constitution Avenue N.E. These rare Stick styled homes feature steeply pitched gable roofs over their bays. The houses may have been remodeled using Stick style detailing or they may be an unusual eclectic mixture of Queen Anne and Stick architecture. The rafters and cross bracing are expressed through applied decoration. The townhouses have decorative gable ends and a few incorporate scroll work into the panels.

The Stick style is characterized by verticality, angularity, asymmetrical composition, and because it was expressed predominately in wood, a certain fragility.

Predominately executed in wood, the wall surfaces of Stick style houses are angled, ornamented, varied in plane and generally accentuated for an overall effect. Applied wood trim creates a paneled effect that is filled in with various materials such as vertical, horizontal or diagonal boarding. The boarding is often beaded. Wood shingles of various patterns may also be used as infill.

Freestanding Stick style houses were designed with steeply pitched gable roofs. Smaller cross gables often intersected the larger roof where small shed dormers could be found. Urban townhouses had an ornamented cornice that concealed the roof. Often the townhouse had a bay window with a decorative gable roof built over the top of the bay. On costly examples, the roof shingles were slate or wood and sometimes laid out in a multicolored pattern.

In Stick architecture, windows were typically double-hung units with large panes of glass in a simple pattern of one over one or two over two. The window trim was kept simple, so it would integrate with the overall applied ornamentation on the exterior walls. Windows in Stick designs were often grouped within a grid of applied trim. Beneath the windows, the space created by the grid was often filled with decorative wood bead board or shingles.

The entrance to a Stick style house was usually announced with a porch or wood canopy. Freestanding homes had generous porches that provided a protected entry. Townhouses were designed with small but highly ornamented canopies.